At the heart of Enthoven's work seems to lie a cognitive dissonance: he approaches his subjects with empathy but simultaneously with a clinical distance. He has described himself as an intuitive observer who has always preferred the delayed interactions of image-making over the rapid and often blunt contact of speaking. Drawing allowed him to share views with ambiguity and provided a means to communicate emotions and complex ideas to his direct surroundings. He would hide allegories in his drawings, often already designs for paintings and objects, in an attempt to subtly influence his family.

Though more modest in aims and broader in scope, his current practice still essentially deals with the family through themes like population ethics, (group)psychology, and domestic architecture and design. He repeats motifs like dogs, houses, and animal traps obsessively throughout a wide variety of mediums and in different scales. Repetition, in general, is always present throughout his practice. At first glance, many of his images look like they are full of digital repetitions that, only upon closer inspection, turn out to be meticulously hand-drawn. For Enthoven, the act of manual repetition, at once pleasurable and profoundly alienating, is related to how images can be at once the same and different. This simultaneity extends to how humans as individuals relate to the collective and vice versa.

His recent work calls to mind weathered 18th or 19th-century manuals and folk prints. Enthoven has always manifested an interest in historical and contemporary visual languages that have functional purposes instead of decorative or artistic aims. Moreover, many of his works take the form of (esoteric) architectural proposals or designs for furniture. However, only after studying design in Eindhoven and sculpture at Yale did Enthoven come to see that his proposals were never to be materially executed. Since he recently extended his practice to painting, a medium of permanency and autonomy, he acquired a new and potent means to emphasize how his proposals are stuck in an infinite state of becoming.

Enthoven describes his paintings functioning much like Sol Lewitt's instructions, in that they are visual instructions and diagrams for the construction of objects and situations. Their execution, however, takes place involuntarily, like a spell, in the viewer's mind, there and then, in the moment of encountering the painting in the exhibition space.

Structure (House), for instance, is a human scale painting (169 x 215cm) in ink and acrylic on linen that stands flat against the wall but is positioned on the floor that it shares with viewers. Enthoven based it on a small hand-drawn diagram of a trap installed between rose bushes inspired by a plate from Noel Chomel's 18th century Huishoudelijk Woordboek (The Family Dictionary). The black ink-drawing is covered in large brushstrokes in apparently random colors in positions.

For the color application, Enthoven adopted a method known as Manière Hollandaise by 19th-century contemporaries because only the Dutch ever used it for their catchpenny prints (centsprenten). While in other countries, stencils were used to add color, and thus value, to black and white prints, Dutch publishers instead, to save resources, had theirs only 'touched' with a few standard colors in random places. What interests Enthoven in this method is that this outrageous act of pragmatism forces the artist to resist interpretation of the image underneath. The result leaves viewers with an ambiguity that emphasizes their interpretive relation to the painting as one of cooperative creation.

This relation also applies to the object he proposes. Even though traps and roses are mundane and exist in the same physical reality as the viewer's, Enthoven creates ambivalence about size, material, and functionality by playing with their scale. Moreover, the rose is an enigmatic symbol so rich in meanings that by now, it hardly has any meaning left.
The trap, likewise, is an ambiguous object. It is simultaneously productive, destructive, protective, life-taking and life-giving, natural and technical. It separates the human from the animal. However, the snares on this painting are the size of nooses, and for that matter, could just as well be small doors. In that sense, the structure is also a house. It proposes a figurative home-ness. Entering this house(trap) means death (of the human) and the birth of the animal. It is declaring oneself animal. It suggests living in a house in which one can not dwell.

Tim Enthoven (1985, The Hague, The Netherlands) is a visual artist based in Amsterdam who works with painting, drawing, print, and books. He received his BA from Design Academy Eindhoven in 2010 under Anthon Beeke and proceeded to illustrate for The New York Times. In 2014 he left for the USA to pursue an MFA in Sculpture at Yale under Martin Kersels. Since then, he has been exhibiting internationally. Solo presentations include Repugnant Conclusion in Fons Welters Gallery in Amsterdam, The Netherlands and Puertas Adentro in Espacio Odeón, Bogotá, Colombia. He has participated in group shows in Abrons Art Center and SPRINGBREAK in NYC, Antenna Space in Shanghai, Loyal Gallery in Stockholm, and The Lisbon Architecture Triennale. He has received multiple awards and grants, including a Plantin Moretus Award, a Prins Bernhard Culture Fund scholarship, and a Mondriaan Fund stipend. 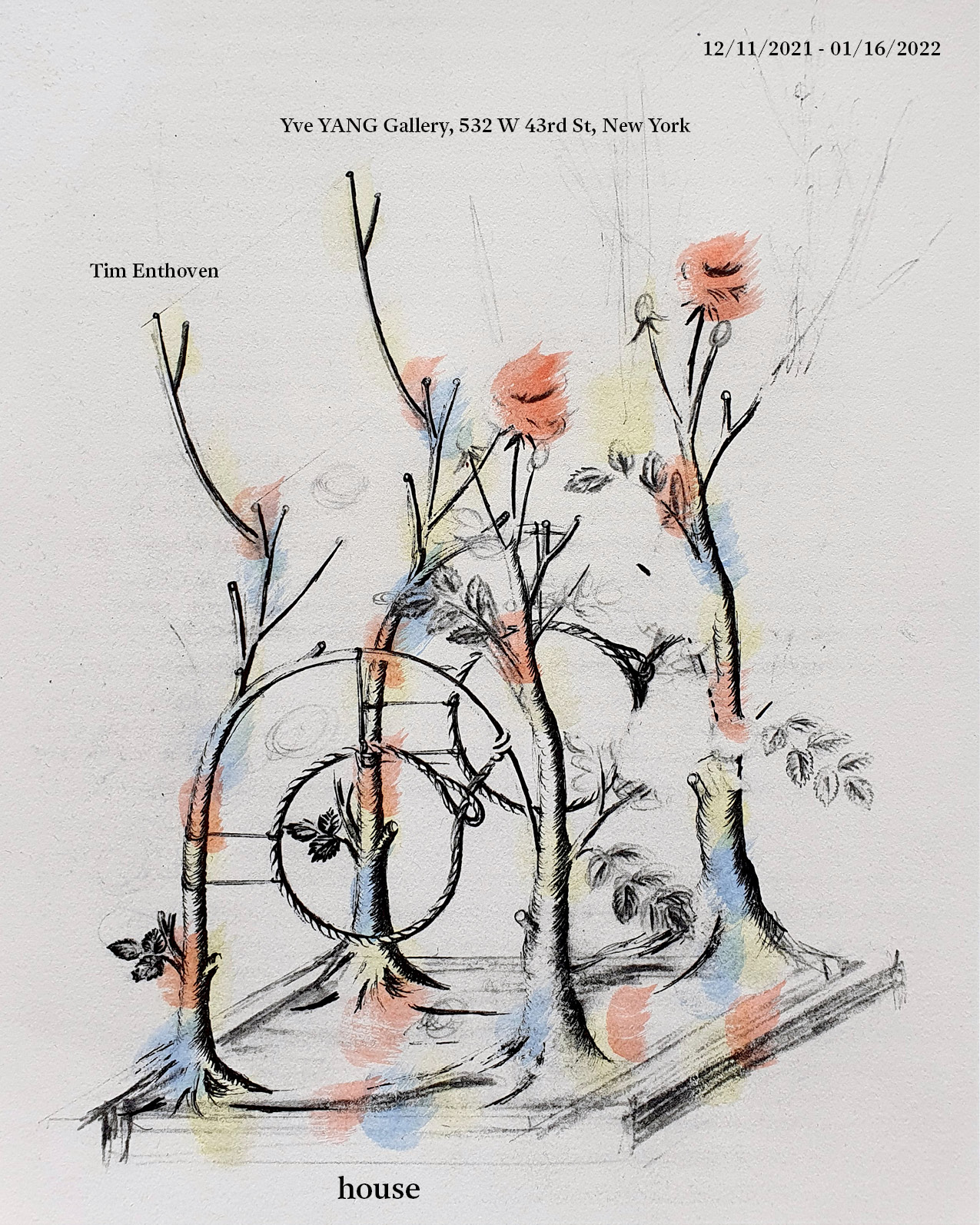